Whatever your musical preferences, there aren't many music-lovers that could deny the talent and energy that Zac Brown Band bring to the stage! The Grammy Award-winning group, who spent years building themselves up on the touring circuit, are nothing short of breathtaking live as they riff and improvise their way through a variety of hits and fan favorites that touch upon all kinds of musical genres! Although a Southern country band at heart, the group has made its name by being unafraid to experiment, but solid in its performance, whilst still having a bucketload of fun! Catch them live, as the group brings its Roar With The Lions Tour to Budweiser Stage on Friday 12th June 2020! 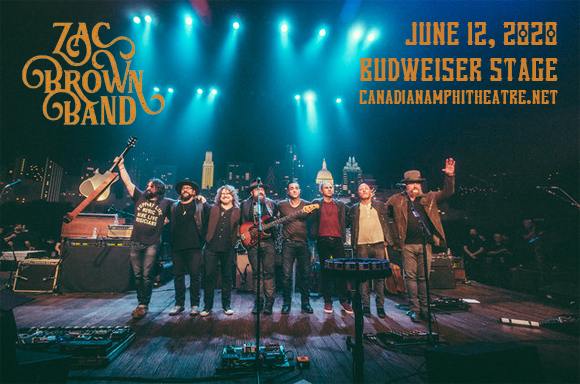 Led by singer and songwriter Zac Brown, Zac Brown Band has evolved over the years from an ambitious solo project, dedicated to relentlessly touring the universities and coffee shops of North America, to a three-time Grammy Award-winning country crossover sensation. Despite the group's current success, Brown's initial strong work ethic and homegrown, community-centred feel still pervades through the band's music, making them accessible and likeable as ever. The group first found mainstream attention in 2008 with the single "Chicken Fried," which hit numboer one and went five-times platinum, as did its associated album, The Foundation. To date, Zac Brown Band has released seven studio albums, and has charted 16 singles on the Billboard Hot Country Songs or Country Airplay chart, including 13 number ones.