Walk Off The Earth Tickets

Juno Award winning, multi-platinum Canadian musical act Walk Off The Earth will be performing at Budweiser Stage on Friday 26th June 2020 with their 1st annual Hometown Hullabaloo! The event, which sees the internationally renowned multi-instrumentalists returning to Canada after a global stint, is part of their Here We Go Tour, which sees them performing at venues across the country. Expect all the usual unconventional and innovative pop covers from this increidbly talented crew, plus support from Toronto singer-songwriter Scott Helman! 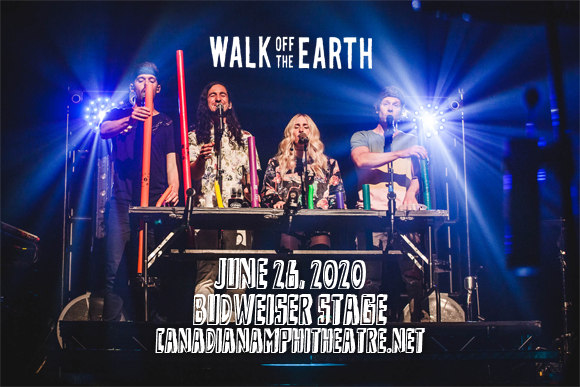 Formed in Burlington, Ontario in 2006, Walk Off the Earth consists of multi-instrumentalists Gianni "Luminati" Nicassio, Sarah Blackwood, Ryan Marshall and Joel Cassady. Known for their complex covers of pop songs that feature instrument-swapping and a variety of unusual instruments including: melodica, beatbox, kalimba, harpejji and whirly tube, as well as sample looping and close vocal harmonies, the group found international fame in 2012 when their video of a cover of Gotye's "Somebody That I Used to Know" went viral on YouTube, receiving over 175 million views in only four months. The group has released seven studio albums, their most recent being 2019's Here We Go! In December 2018, band member Mike "Beard Guy" Taylor died from natural causes – the group devoted their 2019 tour to honoring Taylor's memory.