Exciting news for country fans…! Tim McGraw is back on tour for his first solo outing in five years, and he'll be bringing his brand new show to Budweiser Stage on Saturday 25th July 2020! The Here On Earth Tour is an all-new summer roadshow that gives fans the very best of McGraw in terms of setlist, performance, stage production and more! The superstar is known for his high-grossing, hugely entertaining shows, and always serves up nothing but the best! This year, he'll be joined by a great support line-up – neotrad trio Midland and up-and-coming singer-songwriter Ingrid Andress! 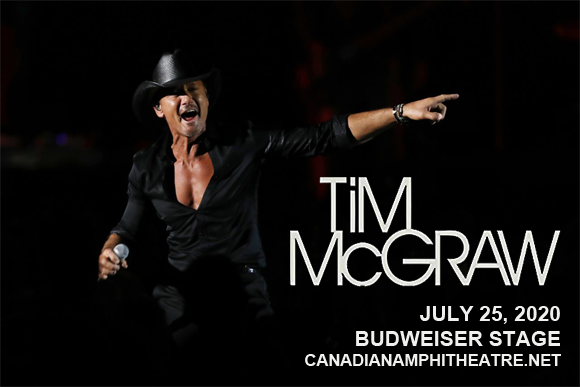 If you're a country fan, you'll undoubtedly know who Tim McGraw is – the megastar is one of the world's best-selling artists, with more than 80 million records sold worldwide! Since his breakthrough in the mid-1990s with the album Not a Moment Too Soon, which was the top country album of 1994, McGraw has consistently proven himself to be one of the most popular country acts out there! Of his 15 studio albums, McGraw has had 10 that have reached the top spot on the Billboard Top Country Albums Chart, and he's also released an incredible 65 singles to date, 25 of which have reached number one on the Hot Country Songs or Country Airplay charts! Three of these number ones – "It's Your Love", "Just to See You Smile", and "Live Like You Were Dying" – were so popular, they ended up being the top country songs of 1997, 1998, and 2004 (respectively). Over the years, McGraw has also earned himself a number of awards and accolades for his work, including three Grammy Awards, 14 Academy of Country Music awards, 11 Country Music Association (CMA) awards, 10 American Music Awards, and three People's Choice Awards.