Groove-laden hip hop band The Roots are bringing the party to Budweiser Stage on Saturday 27th June 2020! The world-famous group, who spend much of their year performing as Jimmy Fallon's house band, are bringing a very special one-off show to the stage that sees them performing a mighty set of both their own tunes and some note-perfect covers too! The Roots are incredible musicians, and always bring a fun-filled event and for this one, they'll be joined in support by insanely talented brass player Trombone Shorty and his band Orleans Avenue! 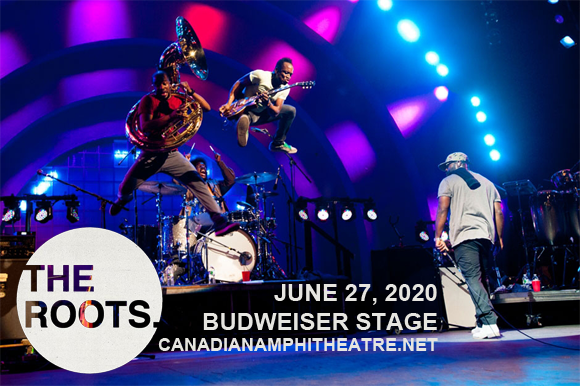 The Roots began in Philadelphia, Pennsylvania in 1987 when Tariq "Black Thought" Trotter and Ahmir "Questlove" Thompson formed a hip hop busking duo, that grew over time to become a band. The group's self-released debut album, Organix (1993), caught the attention of DGC/Geffen, who signed them to the label. Their major-label debut album, Do You Want More?!!!??!, was released in 1994, but it was their 1999 album Things Fall Apart that brought them mainstream success, launchung the single “You Got Me”, co-written by Jill Scott and featuring Eve and Erykah Badu. The following year, the single earned The Roots and Badu a Grammy Award for Best Rap Performance by a Duo or Group. After continued success within the world of hip hop, the group became Jimmy Fallon's house band on Late Night with Jimmy Fallon (2009–2014) and they currently perform as the house band on NBC's The Tonight Show Starring Jimmy Fallon. 2010 brough The Roots two more Grammy Awards for Wake Up!, their collaboration album with John Legend. To date, the band has released 10 studio albums, two EPs and two collaborative albums.