It's a dream come true for fans of The Doobie Brothers, as the iconic group have reunited with Michael McDonald for their 50th anniversary tour! The show comes to Budweiser Stage on Wednesday 29th June 2022 (Rescheduled from Friday 27th August 2021) and lucky fans will get the chance to sing along to their favorite tunes from every era of The Doobie Brothers, including brand new songs that haven't been heard before! This is shaping up to be a very special year for the group as, in addition to celebrating five decades in the industry, they are also nominees for the Rock and Roll Hall of Fame! 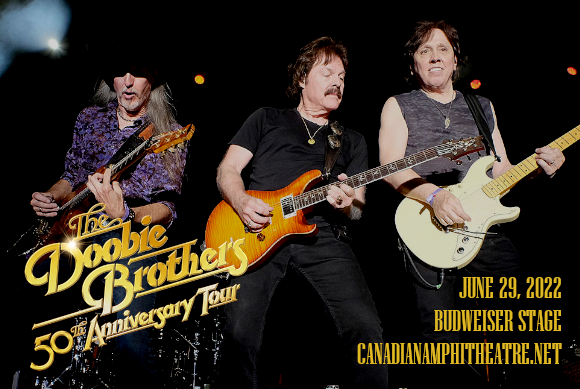 Renowned American rock band The Doobie Brothers began in 1970 in San Jose, California. For the first five years of their career, the group had a mainstream rock and roll sound that also drew influence from folk, country and R&B. After five years, lead singer Tom Johnston left the band and was replaced with a new frontman, Michael McDonald, who brought a blue-eyed soul feel to their music. In 1982, the band split, and when they reformed five years later, Johnston took the helm once more. Since then, the group has regularly toured and recorded, with McDonald occasionally joining as a guest vocalist. Throughout the years, The Doobie Brothers have had several radio hits, including "Listen to the Music," "Black Water," "China Grove," "What a Fool Believes" and "Long Train Runnin'," and they've also had a number of gold and platinum albums in the U.S. In 2004, they were inducted into the Vocal Group Hall of Fame, and they were nominees for induction into Rock and Roll Hall of Fame in 2020.