Iconic British singer and songwriter Rod Stewart comes to Budweiser Stage on Tuesday 26th July 2022 (Rescheduled from Saturday 24th July 2021)! The highly-awarded veteran performer, whose gravelly voice and distinctive look have made him a legend in the business, will be singing songs from his illustrious career that spans over five decades, including solo hits like “Maggie May”, as well as songs from his time fronting The Jeff Beck Group and the Faces! Not only will the two-time Rock & Roll Hall of Fame inductee be performing a full set, but he'll be joined by fellow Rock & Roll Hall of Famers Chep Trick! 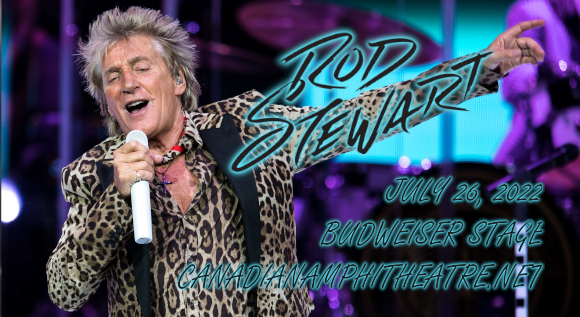 Rod Stewart is one of the world's best-selling music artists of all time, and has sold over 120 million records worldwide since his career began in the 1960s. After beginning his career as a performer with lesser known band The Dimensions and Long John Baldry and the All Stars, Stewart found fame in the late-1960s as a member of both The Jeff Beck Group and the Faces. In 1969, he released his debut solo album, An Old Raincoat Won't Ever Let You Down. Stewart has charted nine number one albums on the UK Albums Chart and 62 UK hit singles throughout his career, including 31 top 10 hits and six number ones, and he has also had 16 top 10 singles in the US, including four Billboard Hot 100 number ones. He has been inducted into the Rock and Roll Hall of Fame twice – once as a solo artist, in 1994, and as a member of the Faces in 2012. He was also inducted into the UK Music Hall of Fame in 2006, and in 2016, he was knighted by Queen Elizabeth II for his charity work and his service to music.