Rascal Flatts have been a long standing name on the Country music scene with their talented displays and abilities of writing and producing the perfect hit song! As they mark 21 years since they first began their career, Rascal Flatts have announced that this will be the last time they head out on to the road. Rascal Flatts will be saying farewell, but they plan to go out in style! Join them as they take to the Budweiser Stage on Thursday 3rd September 2020 – tickets available to book today! 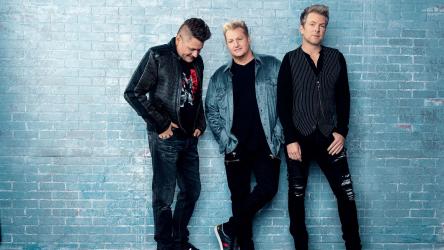 Since the early days of their career, Rascal Flatts blew everybody away with their sheer talents and musicianship between the three members of lead vocalist Gary LeVox, his second cousin Jay DeMarcus on bass guitar, and Joe Don Rooney on guitar and banjo. Together they united and gave the world a piece to the country music puzzle that we were missing. With their countless studio releases they gave their fans a steady and full range of material to listen to and fall in love with.

Rascal Flatts kick started their career back in 1999 as the trio came together to pursue their passion for making music. As they became a success on the mainstream, Rascal Flatts developed a huge worldwide following that has followed their every move right up until today. The group brought out their first record back in 2000 as they signed their first ever deal with Disney Music Group's Lyric Street Records and the rest was truly history as they captivated music fans and received nothing but the highest praise from critics and fellow artists within the Country genre.

Come and celebrate with Rascal Flatts as they showcase all of their biggest and best from their career in a special concert that will no doubt stay in your heart and memories for many years to come! If you love their music then whatever you do, don't miss out on this once in a lifetime opportunity to catch their last ever tour! Tickets are set to sell out fast – book yours in advance to avoid disappointment!