Renowned Canadian songwriters Randy Bachman & Burton Cummings will be performing at Budweiser Stage on Monday 27th July 2020 as part of their Together Again Tour! The artists, who reunited last year for the first time in a decade, are best known for their work as part of the band the Guess Who, as well as for their music as the duo Bachman Cummings, and will be performing a varied and eclectic set of their hits from over the years!

“We’re the two guys who wrote and sang these songs and I think people know that and want to hear the real thing. Bachman Cummings are out there delivering that,” says Cummings. “Not all artists are lucky enough to have this kind of staying power. Randy and I are able to touch Guess Who, BTO and Cummings solo stuff. We still have an audience that wants to hear those songs done by the original guys.” 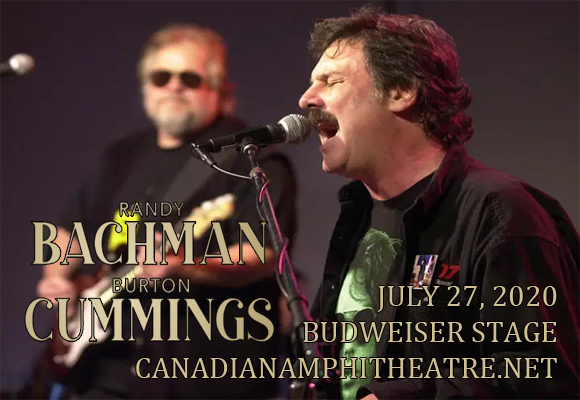 Randy Bachman and Burton Cummings first met as founding members of the Canadian rock band The Guess Who, which had hits with the songs "American Woman," "No Time", "Share the Land", "Hand Me Down World", "Laughing", "Star Baby", "New Mother Nature", "These Eyes", and "Clap for the Wolfman". Throughout the 1970s, both artists enjoyed success outside the band, with Cummings concentrating on his solo career and Bachman performing with the Bachman–Turner Overdrive. Over the years, the two artists have often performed together as The Bachman-Cummings Band, featuring Toronto band The Carpet Frogs as their backing group. The Bachman-Cummings Song Book, featuring songs from The Guess Who, Bachman–Turner Overdrive and Cummings' solo career, was released in 2006. That year, they also released The Thunderbird Trax – a compilation of previously unreleased material recorded by Bachman and Cummings circa 1987 – and in 2007 they released Jukebox – a covers album of songs by artists such as Bob Dylan, The Shadows and The Beatles. In 2019, the pair reunited after a decade apart and began touring together again.