Two trailblazing bands of the British synth-pop explosion of the 1980s have come together for a co-headlining tour that will bring back the heady days of asymmetrical haircuts and monochrome duds! New Order & Pet Shop Boys are heading out on what, believe it or not, will be their first time ever hitting the road together! The Unity Tour comes to Budweiser Stage on Saturday 17th September 2022 (Rescheduled from Saturday 18th September 2021), and fans can expect a night of nostalgic club anthems like "Blue Monday," "West End Girls," "It's a Sin," and more! Get ready to dance to the beat of an 808 once more! 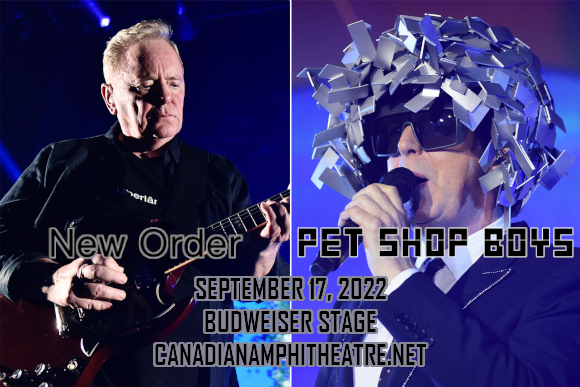 After Joy Division lead singer Ian Curtis passed away in 1980, the band's remaining members Bernard Sumner, Peter Hook, and Stephen Morris began performing together under the name New Order, with Morris's girlfriend Gillian Gilbert joining the band shortly after its formation. Where Joy Division had a post-punk sound, New Order incorporated electronic and dance music, and quickly became pioneers of the synthpop sound that was hugely popular throughout the 1980s. The band's close connections with Manchester-based independent record label Factory Records and its nightclub The Haçienda, as well as graphic designer Peter Saville, made them icons of the club scene. "Blue Monday," their 1983 hit became the best-selling 12-inch single of all time, and they had both commercial and critical success with the albums Power, Corruption & Lies (1983), Technique (1989), as well as their singles compilation Substance (1987). Over the years, the band has navigated several line-up changes but continues to tour regularly. New Order's latest release is 2015's Music Complete.