Lindsey Stirling brings with her all the glamour, theatrics, stunning costume and lively choreography of a musical theatre show, but matched with the virtuosity of a world-class violinist, and the banging beats of an epic club night! The genre-defying renaissance woman brings her Artemis Tour to Budweiser Stage on Friday 13th August 2021 with all its steampunk flavor and dramatic spectacle! The chart-topping artist will be performing tracks from her album of the same name, which draws inspiration from Greek mythology and has themes of light over darkness and triumph over adversity! 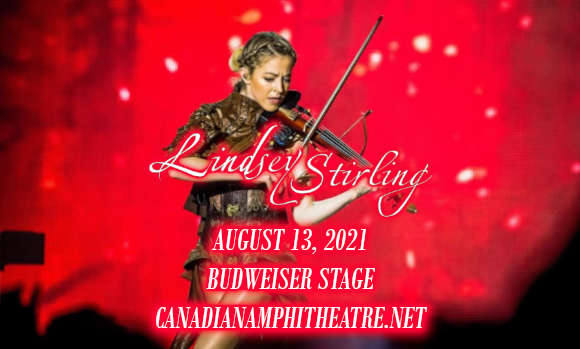 An innovative trailblazer, Lindsey Stirling has not only created her own musical genre and style of performance, but she's also made a wildly successful career from both. The violinist, singer, songwriter, composer, dancer and video editor has come a long way since she was first introduced to audiences as a quarter-finalist on the 10th season of America's Got Talent. Her unique fusion of musicianship and physicality, as well as her blending of musical genres – drawing from classical music, hip hop, EDM and more – wowed the judges and the world, and although she didn't win, Stirling became a household name. Her popularity then grew through her YouTube channel, where she uploaded visually and conceptually stunning music videos, and which has amassed 12.7 million subscribers and over 2 billion views to date. Stirling released her eponymous debut album in 2012, finding instant success within the classical crossover community. She has released a total of five albums throughout career, and each of them has reached number one on the Billboard Classical Albums chart. Four of her albums have also hit the top spot on the Top Dance/Electronic Albums chart, and four have reached the top five on the Independent Albums chart, as well as two albums that have hit the top five of the Billboard 200. Her most recent release – 2019's Artemis – features collaborations with Elle King and Evanescence's Amy Lee.