Lady Antebellum are bringing of the most highly-anticipated country tours of the summer, their Ocean Tour, to Budweiser Stage on Friday 21st August 2020! The tour is their first since 2018's co-headlining Summer Plays On Tour with Darius Rucker, and sees them performing tracks from Ocean, their 2019 eighth studio album, including "What If I Never Get Over You," "Ocean," "What I'm Leaving For," "Pictures," "Boots," and "Be Patient With My Love"! The trio is known for picking excellent support line-ups, and this year's no different with Jake Owen & Maddie and Tae taking to the stage! 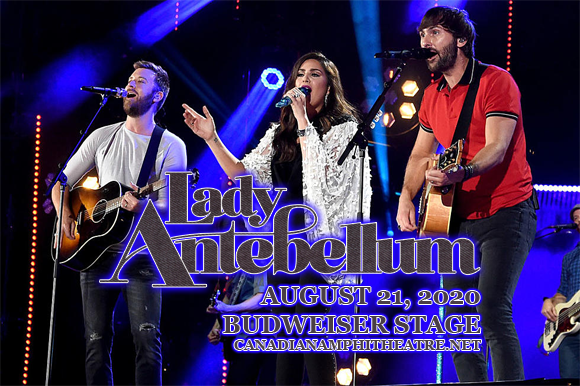 Formed in 2006, country music trio Lady Antebellum quickly became darlings of the Nashville circuit, and were introduced to the world the following year when they were featured on Jim Brickman’s single, “Never Alone,” which reached number 14 on Billboard’s Adult Contemporary chart. With the feature, they caught the attention of Capitol Nashville, who signed them and immediately brought them into the studio to work on their self-titled debut album. The album was released the following year, and was a huge hit, reaching number four on the Billboard Hot 100 and debuted at number one on the Billboard Top Country Albums chart, making them the first new duo or group to do so. That year, they won the award for Top New Duo or Group from the Academy of Country Music and New Artist of the Year from the Country Music Association. Over the years, they have won a whopping 51 awards, including seven Grammy Awards (including five won at the 2011 Grammy Awards ceremony), six CMA Awards, five CMT Awards, four AMA Awards, nine American Country Awards and eight ACM Awards to date, among others. In addition, they've produced sixteen singles on the Hot Country Songs and Country Airplay charts, including nine number ones, and have sold over 12.5 million digital singles and 10 million albums in the US alone. In 2019, they released their latest album, Ocean.