Join the Kidz Bop Kids – Ashton, Mandy, Max, Mia, Miller and Twinkle – for the Kids Bop 2020 Tour! An all-singing, all-dancing stage show that's super fun for parents and younger ones alike, Kidz Bop Live sees the incredible Kidz Bop singers strutting their stuff, as they bring a high energy show to the stage that's guaranteed to get everybody dancing! Singing hits from the most recent Kidz Bop albums, the Kidz Bop Kids will be bringing the party to Budweiser Stage on Sunday 29th August 2021! 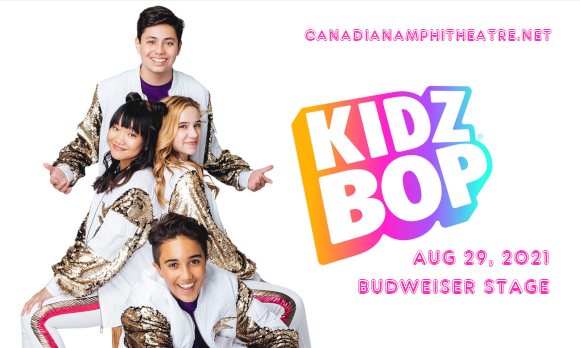 Many parents known the struggle of wanting to sing along with their children to their favorite radio hits, only to find they aren't age-appropriate… In 2001, Razor & Tie co-founders Cliff Chenfeld and Craig Balsam decided to change the status quo and formed Kidz Bop – a global phenomenon that has sold over 17 million albums worldwide to date! Kidz Bop takes chart songs and records them by kids, for kids, and the franchise has released over 40 main albums to date! Billboard Magazine's number one kids' artist for eight consecutive years (2010 – 2017), Kidz Bop is a revolution in children's music!