Jason Aldean comes to Budweiser Stage on Saturday 18th July 2020 for the second night in a row with an extra show, due to popular demand! The country music superstar is performing as part of his extended We Back Tour, which is named after a track from his latest album, 9, and is set to be one of his biggest yet! Fans will get the opportunity to sing along to all his latest tracks from the incredible new album, plus loads more of his chart-topping hits! He's also put in place one of the summer's most exciting support line-ups, with Brett Young, Mitchell Tenpenny & Dee Jay Silver joining him for the ride! 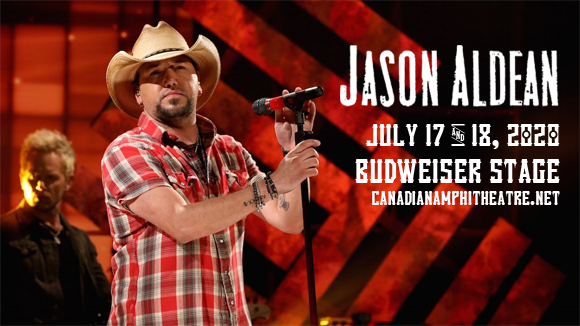 For some, success comes overnight, but for country music singer and songwriter Jason Aldean, success was nearly a decade in the making. Despite deciding to set his sights on music after finishing high school, the beginning of Aldean's career is peppered with near-misses and disappointments. After spending several years playing the clubs and bars of Georgia, with his father as a booking agent, he got the chance of a lifetime when a representative from Warner-Chappell approached him at a showcase and arranged to meet in Nashville. Aldean was signed to the label and moved to Music City, but he was subsequently dropped in 2000 after several of his sessions had been postponed. For the next four years, he went back and forth between labels, with nothing coming to fruition until five weeks after he'd decided to move home if it didn't work out in six months when he landed a contract with Broken Bow Records. The following year, his self-titled debut album rocketed him to stardom within the country music community, launching three hit singles, including his first number one. To date, he has charted 21 number one singles and has released seven albums that have had platinum or multi-platinum sales, making him of country's top-selling artists. His latest release was last year's ninth studio album, 9.