It starts with strains from a mandolin, rhythmic handclaps, and a folksy yet anthemic voice that seem to cry out of the darkness..calling, beckoning you to follow their lead.  And yes, Imagine Dragons are now like modern-day pied pipers who are leading a multitude of pop-rock music lovers, turning them into rabid fans.  And just as their song goes — ‘it’s time to begin’… walking down the road leading to the Echo Beach at Molson Canadian Amphitheatre,  Toronto, Canada,  for a night of pure, compelling and fiery modern rock live performance from none other than — Imagine Dragons!  Prepare and mark this date — July 29, 2013 at 8:00 pm, Imagine Dragons will rock and roar. 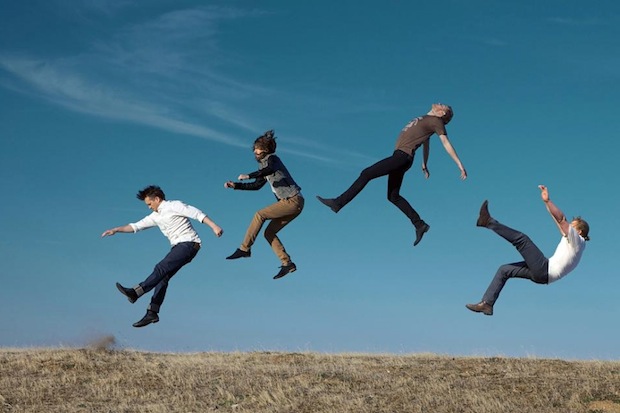 Billboard Magazine listed them as one of “2012′s Brightest New Stars”.  Their lead single ‘It’s Time’, reached the top five on the Billboard Alternative and Billboard Rock charts; and holds the record for the longest run on the 2012 Alternative Top 10 charts.

Imagine Dragons followed the indie-alternative route before making it big in the mainstream, so to speak.  Prior to their major label debut album, they have released 2 EP’s in 2010, and recorded the EP ‘It’s Time’ in 2011.  With the release of ‘It’s Time’ as the lead title track, all hell broke lose.  Like a ball of fire rolling down a hill, ‘It’s Time’ was burning its way up the charts. The band was named MTV PUSH Artist of the Week. The video was subsequently nominated for an MTV Video Music Award in the “Best Rock Video” category.  It landed as the feature track in the trailer of the movie ‘Perks of Being A Wallflower’, and Darren Criss covered it for an episode of the TV-musical hit series, ‘Glee’.

Imagine Dragons is now gearing up for world domination.  With their chart-topping debut single, the release of their full album ‘Night Visions’, with the brand new single ‘Radioactive’, and a string of gigs in various parts of the globe, they are poised to rule and conquer.

Unless you’ve been living in a dungeon, the music of Imagine Dragons is just about everywhere.  Why? People love them.  Fans can’t get enough of them.  Admit it, you’re definitely one who’s raring to go see a live performance, right?  Yes, that’s your cue — hit that ‘buy your tickets’ button now!