Hootie & The Blowfish are back! The multi-platinum-selling rock band have returned after a lengthy hiatus for their first tour in over a decade, supporting their first new release in 13 years! The Darius Rucker-fronted group comes to Budweiser Stage on Thursday 29th August 2019 as part of the Group Therapy Tour, with fellow '90s hit-makers Barenaked Ladies in support! 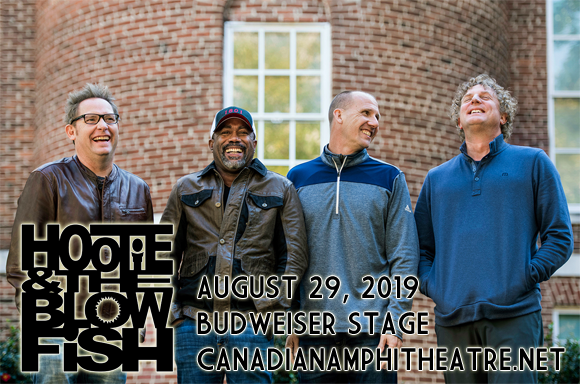 Formed in Columbia, South Carolina, in 1986, Hootie and the Blowfish is an American rock band consisting of Darius Rucker, Mark Bryan, Dean Felber and Jim Sonefeld. The band found instant mainstream success with their debut album Cracked Rear View, released in 1994, which became the 19th-best-selling album of all time in the United States, and was certified platinum 21 times. The record became the best-selling album of 1995 and launched four top 20 singles: "Hold My Hand", "Let Her Cry", "Only Wanna Be with You", and "Time". The group went on to win the "Best New Artist" award at the 1996 Grammy Awards. After charting sixteen singles on various Billboard singles charts and releasing five studio albums, the group went on hiatus in 2008, reforming in 2018. To date, the band has sold over 21 million copies of their albums in the United States. In spring 2018, the group will release their first album in 13 years.