EVENT CANCELLED. We regret to inform you Halsey has cancelled her scheduled 2021 tour. Please request a ticket refund from your point of purchase.

Grammy-nominated, multi-platinum-selling singer-songwriter Halsey comes to Budweiser Stage on Sunday 12th July 2020 on her Manic World Tour! Promoting the release of her third studio album, which is also called Manic and contains her six-times platinum single “Without Me,” she'll be performing an electrifying set of brand new material, delivering the show with her trademark high-octane energy! A true star, unafraid to forge her own path in the industry, Halsey's combination of candid lyricism, unique and powerful voice, and love for dramatic performance single her out as an absolute must-see live act! 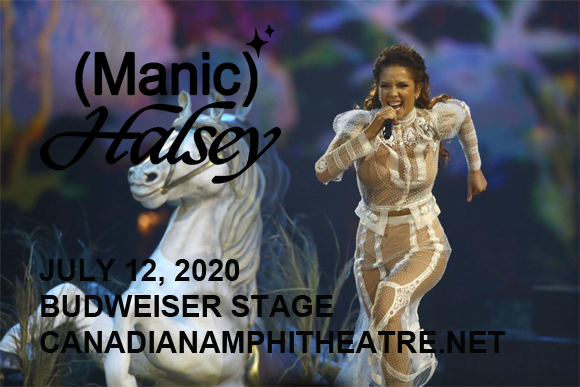 American singer and songwriter Halsey first came to public attention via her releases on social media such as YouTube, Kik and Tumblr, and was signed to Astralwerks in 2014. She released Room 93, her debut EP, later that year and her debut studio album, Badlands, was released in 2015. The album debuted at number two on the Billboard 200 and gained platinum certification, also launching four platinum-selling singles. She found further fame as a featured vocalist on The Chainsmokers' chart-topping single "Closer" in 2016, which was certified diamond in the US. This in turn led to her second studio album, Hopeless Fountain Kingdom (2017), topping the Billboard 200. Manic, her third studio album, will be released in 2020 and is preceded by her first Billboard Hot 100 number one single as a lead artist, "Without Me".