Florence and The Machine Tickets

The 'dog days are finally over as the 'dance fever kicks in! Florence and The Machine is set to release their much-awaited fifth studio record "Dance Fever" on May 13th. In support of their album which is “a fairytale of 14 songs,” said singer Florence in its caption for the album's grand IG reveal, Florence and The Machine is set to embark on a tour, stopping by at Budweiser Stage on Saturday, 3rd of September, 2022 with special guest Arlo Parks. They're the English indie rockers behind the smash hit singles "Shake It Out", "Spectrum (Say My Name)", and "Dog Days Are Over". Catch them perform their biggest hits, fan-favorite anthems, and fresh new songs off of 'Dance Fever' live on stage! Book your tickets now! 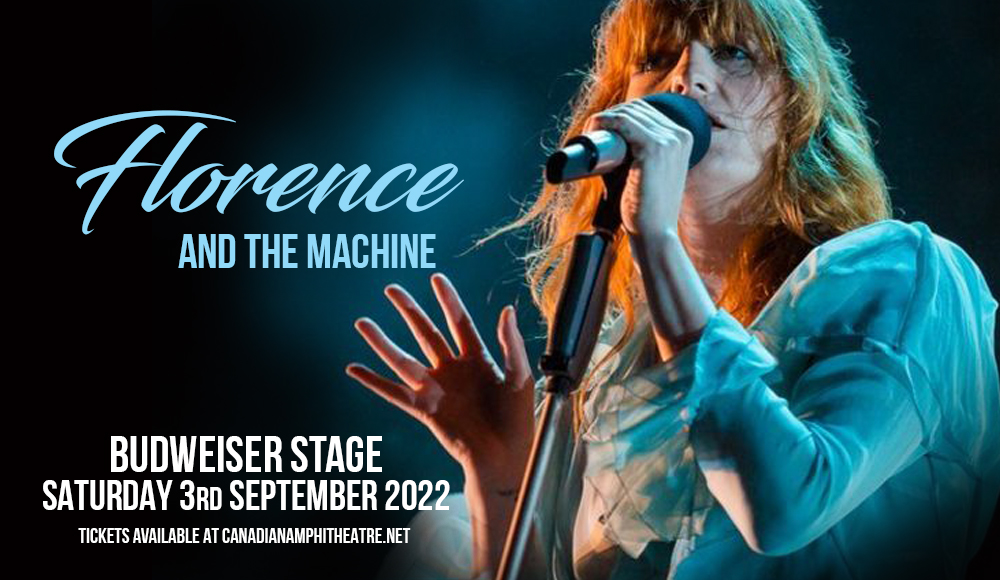 After 2018's "High as Hope" album, fans have been hoping for Florence and The Machine's next studio record. As 2022 rose, the band shared three new singles "King", "Heaven Is Here", and "My Love", giving fans a taste of new music before unveiling the release of their next album "Dance Fever".

With the 'dance fever coming up, Florence and The Machine dates back to its early beginnings in 2007 when Florence Welch and Isabella Summers started collaborating in their teens. "The name Florence and the Machine started off as a private joke that got out of hand. I made music with my friend, who we called Isabella Machine to which I was Florence Robot…" said Welch.

As a band, Florence and The Machine released their debut album "Lungs" in 2009. It sold a hundred thousand copies in the UK just after a month from its release, and now sold over 3 million copies around the world awarded 6x Platinum by the BPI and 2x Platinum by the RIAA.

"Lungs" featured mega-hit singles "Dog Days Are Over" and "You've Got the Love" which propelled the band to become one of the world's favorites in the indie rock scene. Their second studio record "Ceremonials" also hit #1 in the UK and #6 in the US, featuring its hit singles "Shake It Out", "Never Let Me Go", and "Spectrum (Say My Name)".

Years later, Florence and The Machine continued to release albums and indie-favorite singles. 2022 marks the band's first album for the new decade with the much-awaited release of "Dance Fever" on May 13th. Three singles in, fans are itching to hear surprises that the band has in store in their new record. It's “a fairytale of 14 songs,” according to Welch.

"My Love" is the band's latest single prior to the release of the new album. The track is heavy on synths and exudes high levels of energy for the listener. Though, they shared that it was initially made as an acoustic "sad little poem" before given life as a dance popping track with lyrics inspired by tragic heroines. “Sometimes the biggest dance songs, I think, have a really sad core to them,” said Florence in a talk with BBC Radio.

The Dog Days are finally coming to an end as Florence and The Machine is set to release 'Dance Fever' real soon, and embark on a tour to meet their fans, perform their biggest hits, and fresh new music from their new album. A night of your favorite indie fairytales awaits, book your tickets now!