David Gray comes to Budweiser Stage on Thursday 16th July 2020 on the White Ladder 20th Anniversary Tour! White Ladder spawned a host of hits that were radio staples throughout the early-2000s and its electronica-tinged folk sound is as enthralling as it ever was:

“It’s an album that came from nowhere to steal the hearts of millions all over the world, completely transforming my life in the process,” Gray said.

“20 years on and it feels like White Ladder is just as alive for people now as it was back then.” 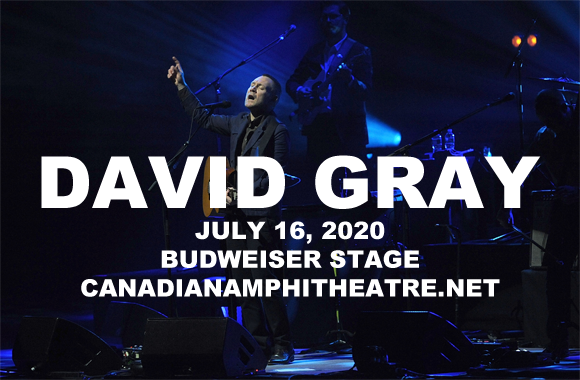 Having steadily made a name for himself on the British folk-rock scene since 1993, singer-songwriter David Gray suddenly found fame in 2000 with a re-release of his fourth studio album, White Ladder. White Ladder's unique electronica-tinged folk was a huge hit and the album launched five globally-successful singles: "Babylon", "This Year's Love", "Please Forgive Me", "Sail Away" and "Say Hello Wave Goodbye". The album was a game changer, particularly in his native Britain, spending a total of 175 weeks on the UK charts, making it one of the longest-charting albums in UK chart history. It also became the UK's tenth best-selling album of the 21st century and the fifth best-selling album of the 2000s in the UK. Gray followed with two more UK number one albums, and has released 11 studio albums to date, including Gold in a Brass Age, which was released in March 2019.