Music lovers get ready as the exciting Barenaked Ladies are back on the road for 2022 and are bringing a special showcase along with guests Gin Blossoms & Toad The Wet Sprocket! As they head to Budweiser Stage on Tuesday 30th August 2022 (Rescheduled from Thursday 21st July 2022) – you can now secure your tickets for the main night! Barenaked Ladies always give an unforgettable performance – don't miss out! 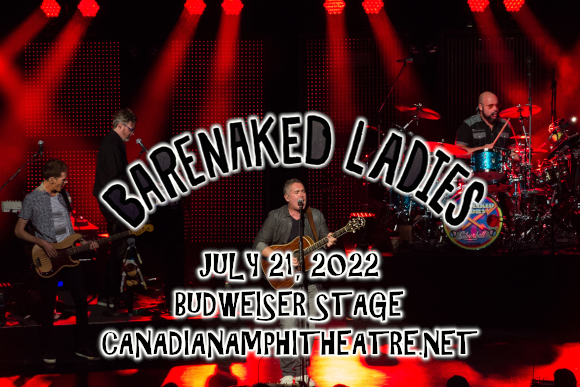 The Canadian rockers – Barenaked Ladies have proven they have got what it takes to become a worldwide sensation ever since they first formed all the way back in the late 1980's. Their music releases first came to light as they brought out their first cassette release in 1991 and kick started a successful career from their initial gold certification! With their debut hitting the big time, Barenaked Ladies continued on their journey and brought to light their first full length album via Reprise Records just one year later. The record included their unforgettable singles, "If I Had $1000000" and "Brian Wilson".

Throughout the years, Barenaked Ladies have kept up with the times, which has given them a wider fan base each and every time they've released their much loved music. As they have worked and developed on their sound, first starting as an acoustic unit and progressing towards a full band sound that incorporates all kinds of musical styles from Pop to Rock, Hiphop, Rap… the list goes on. During the 1990's they truly honed in on their instantly recognisable sound and are still known for albums such as their 1998 release of Stunt which gained them impressive sales around the globe, particularly within the US and the UK.

Since then they have gained a solid reputation for their incredible live concerts where they often showcase their strong bond between the band members with many moments of banter and even surprises to their fans such as improvised rapping between the performances of their songs. To this day, they have also gained unbelievable triumphs which has helped to spread their music far and wide, from two Grammy Award wins for their work and an induction into the Canadian Music Hall of Fame. Along with this they have reached an impressive status in the charts and have sold over fifteen million singles and albums worldwide.

If you love Barenaked Ladies music then be sure to get your tickets and head on down for their exclusive dates for 2022! Lucky fans can grab the chance to be a part of the crowd at their 'Last Summer On Earth' adventure! What are you waiting for?!