Everybody's favorite boy band are back on the road for 2022! Yes, you heard it right, Backstreet Boys are returning to the stage for an unforgettable night of all of their best loved hit songs! Get prepared as they will be coming live to Budweiser Stage on Friday 1st July 2022 (Rescheduled from Friday 2nd July 2021) – tickets are now on sale, but whatever you do, don't wait too long as Backstreet Boys are bound to be a sell out! 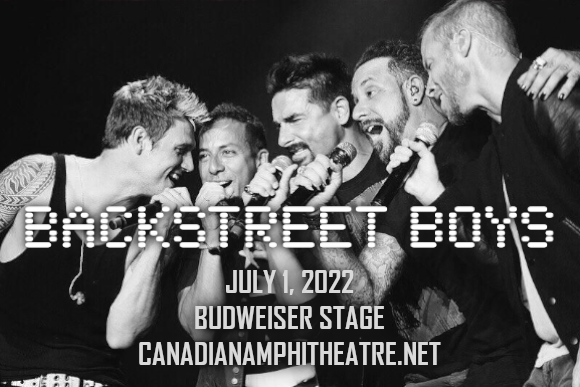 With their incredible, out of this world popularity Backstreet Boys won over the hearts of so many music lovers during the 1990s, with their unforgettable hit singles, Backstreet Boys grabbed the spotlight and have remained to be one of the biggest boy bands of all time.
The talented vocalists AJ McLean, Howie Dorough, Nick Carter, Kevin Richardson, and Brian Littrell make up the Backstreet Boys amazing line-up and together they have exceeded all expectations in their groundbreaking, long lasting career.

As a firm favorite on the pop music scene, Backstreet Boys kick started it all back in 1996 as they dropped their debut self titled album, the group became an over night sensation and continued to release other records such as Backstreet's Back (1997) which along side their first album created their international success. Backstreet Boys became known as one of the superstar names at the time and they kept on giving their fans what they wanted with more material from their third record Millennium (1999) and Black & Blue (2000).

Backstreet Boys are now known as the ultimate throwback as they bring all of their classic hit songs to the stage and of course all of their iconic dance moves. With the exciting news of their reunion in 2012, Backstreet Boys are truly back on the scene and plan to bring another live tour in 2020! Expect to catch all of your favorite songs from "I Want It That Way" to "Everybody" "As Long As You Love Me" and so so much more…

With their global success, Backstreet Boys have sold over one hundred million albums worldwide and are the highest selling boy band to ever walk the earth – whatever you do this Fall, don't miss out on this once in a lifetime opportunity to see Backstreet Boys do what they do best – perform LIVE!