Backstreet's back! That's right, Backstreet Boys have extended their hugely popular DNA Tour, which comes to Budweiser Stage on Saturday 2nd July 2022 (Rescheduled from Saturday 3rd July 2021)! The top-selling boyband has announced another leg of their biggest stint on the road in 18 years and will be performing a high-energy, high-production show that will thrill and delight fans with a combination of classic BSB hits and tracks from their newer number-one album, including "Don't Go Breaking My Heart", "Chances", "No Place" and more! Expect a Larger Than Life spectacular from these pop icons! 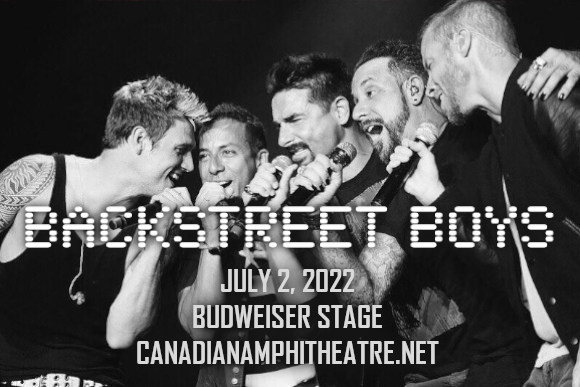 Backstreet Boys are the best-selling boy band of all time, and one of the world's best-selling music artists, having sold over 100 million records worldwide. The group made it big as teen stars in the 1990s as forerunners of the commercial pop movement that dominated the music industry at the time. Formed in 1993, the group (consisting of AJ McLean, Howie Dorough, Nick Carter, Kevin Richardson, and Brian Littrell) had instant international success with its 1996 self-titled debut album, which was released internationally, but not in the US, and was particularly popular in the UK and the rest of Europe. Their US debut came in 1997, peaking at number four on the Billboard 200 albums chart and has since been certified 14× platinum (diamond) by the RIAA. The band's first 10 studio albums all reached the top 10 on the Billboard 200, making them the first group since Led Zeppelin, and the only boy band, to do so. In 2003, Backstreet Boys embarked upon a two-year hiatus, returning in 2005 with the album Never Gone. Two years after that, Richardson left the band to pursue personal projects but rejoined the group permanently in 2012. The following year marked the group's 20th anniversary, and that year they received a star on the Hollywood Walk of Fame. Their 10th and most recent studio album, DNA, was released in 2019.