Multi-instrumentalist band Arcade Fire bring their reinvention of dance and rhythm based music to the Molson Amphitheatre on Friday 29th August. In support of their latest album "Reflektor" experience the polyrhythmic, disco-fied, rinky-dink carnival ball that is ARCADE FIRE! Tickets available now! 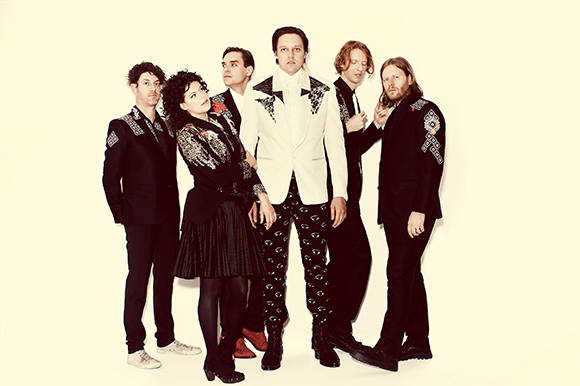 Arcade Fire is an Indie Rock band from Montreal, Canada. The band consists of husband and wife Win Butler and Régine Chassagne, along with Richard Reed Parry, William Butler, Tim Kingsbury and Jeremy Gara. The band is known for their unique live performances, which include a huge variety of instruments such as: guitar, drums, bass guitar, piano, violin, viola, cello, double bass, xylophone, glockenspiel, keyboard, synthesizer, French horn, accordion, harp, mandolin, and hurdy-gurdy. All of which are brought on tour and used in all performances. Band members take turns on different instruments for each of the live performances adding a unique twist.

The debut album was released their first album which was critically acclaimed named Funeral which has won many awards. Including a Grammy for album of the year. Arcade Fire released their fourth album Reflektor and scored the feature film Her, for which William Butler (current member of the band) and Owen Pallett were nominated for Best Original Score at the 86th Academy Awards.