15-time Grammy Award-winning R&B superstar Alicia Keys makes her eagerly-awaited return to touring with Alicia – The World Tour, coming to Budweiser Stage on Sunday 16th August 2020! This marks her first big stint on the road in seven years, and fans can expect a multimedia-driven spectacle from the global sensation, who fills each and every live performance with sould and class! Keys will be singing tracks from her recently released seventh studio album, Alicia, plus an array of her worldwide hits like “No One,” “If I Ain’t Got You,” and “Girl on Fire!” 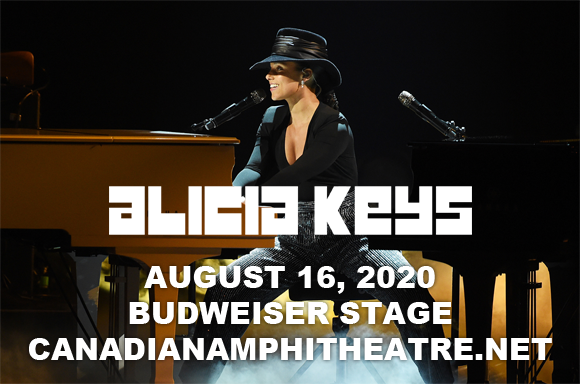 When American singer, songwriter, pianist and producer Alicia Keys released her debut album, it was clear that she was going to be a major star. Seamlessly blending R&B, hip-hop, classical, and jazz to create a unique and mature sound that took the world by storm, Keys became a revered artist from the get-go, and her debut album, Songs in A Minor (2001), was a giant success. Over the years, she has built upon the success of her debut to become a multi-platinum-selling, chart-topping musical icon. Keys has won 15 Grammy Awards, 17 NAACP Image Awards, 12 ASCAP Awards, and an award from the Songwriters Hall of Fame and National Music Publishers Association for her services to music. She releases her seventh studio album, ALICIA, in 2020.