It's a big year for Alanis Morissette, who celebrates the 25th anniversary of her goliath 1995 album Jagged Little Pill, as well as a Broadway show based on the album, and the release of her ninth studio album Such Pretty Forks in the Road! The "Ironic" comes to Budweiser Stage on Saturday 11th July 2020 to perform a night of hits from Jagged Little Pill, including "You Oughta Know", "Hand in My Pocket", "You Learn", "Head over Feet" and "All I Really Want", as well as brand new material! She'll be joined by Scottish-American alt-rockers Garbage and indie-rock singer-songwriter Liz Phair in support! 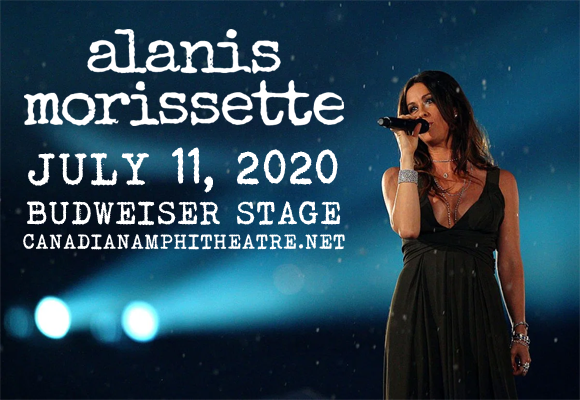 Canadian-born American singer-songwriter Alanis Morissette found worldwide fame with her breakthrough album Jagged Little Pill (1995). In the early 1990s, she had enjoyed modest success in Canada with her first two dance-pop oriented albums, but it was the grunge-pop influenced Jagged Little Pill that found mass appeal with its confessional lyrics and Morissette's raw vocal power. The album was in the top 20 on the Billboard 200 albums chart for over a year and sold more than 16 million copies in the U.S., gaining platinum certification, as well as winning her the Grammy Awards for Best Female Rock Vocal Performance, Best Rock Song (both for "You Oughta Know"), Best Rock Album and Album of the Year. Globally, it sold more than 33 million copies, becoming the second biggest-selling album of all time by a female artist. In Canada, Jagged Little Pill was certified 12-times platinum and won Morissette six Juno Awards. To date, she has won a total of seven Grammy Awards and 12 Juno Awards to date, and she has sold over 75 million records worldwide. This year, she releases her ninth studio album, Such Pretty Forks in the Road.